You've heard people say bitcoin is bad for the environment,

but did you know computer games and Christmas lights consume the same amount of energy?

Learn the bitcoin energy facts in the right context 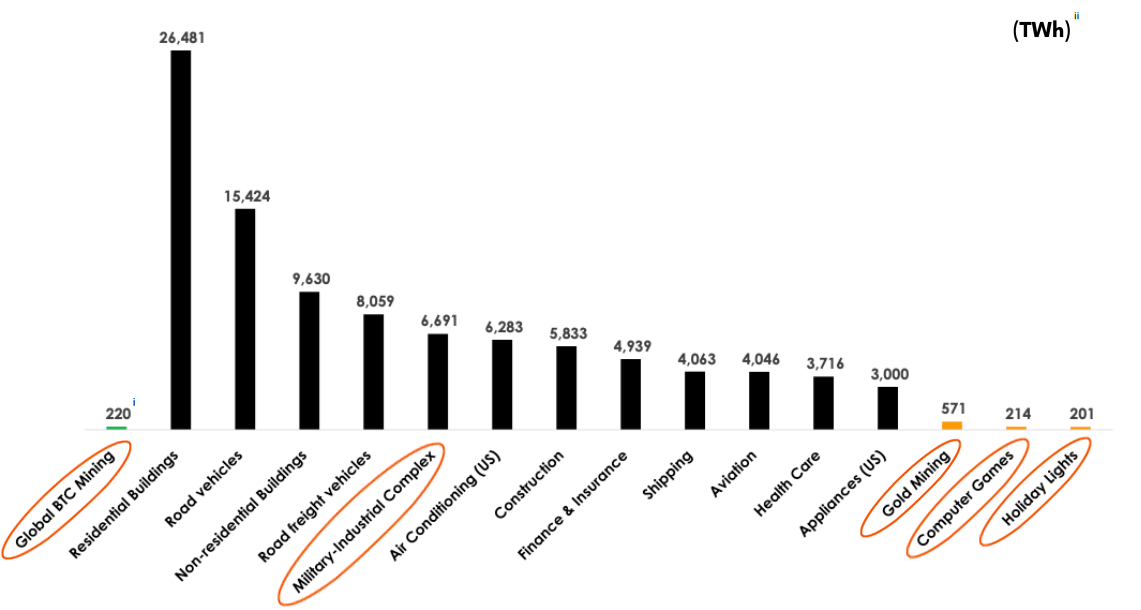 Recent estimates show that computer games and Christmas lights use more electricity than all of Sweden.

Computer games and holiday lights use about the same amount of energy per year as bitcoin does. However, you don't see any expensive PR campaigns to get them banned. Additionally, the gold industry uses 160% more energy, and the military-industrial complex uses almost 3,000% more than bitcoin.

Claims that bitcoin mining could help warm the planet are unfounded.

These claims are based on a linear extrapolation of bitcoin's current number of transactions and energy use to calculate its future energy consumption at full adoption. This is factually incorrect (read Nic Carter's detailed rebuttal of this claim HERE).

Transactions on bitcoin's base layer are limited by its block size. Bitcoin can't become widely adopted without scaling through 2nd layer solutions such as the Lightning Network and sidechains like the Liquid Network. This method of scaling does not cause higher energy consumption.

Bitcoin mining naturally seeks the cheapest energy sources. Currently, 58.5% of bitcoin’s energy mix is from renewable sources. That's more than the energy mix of most countries. 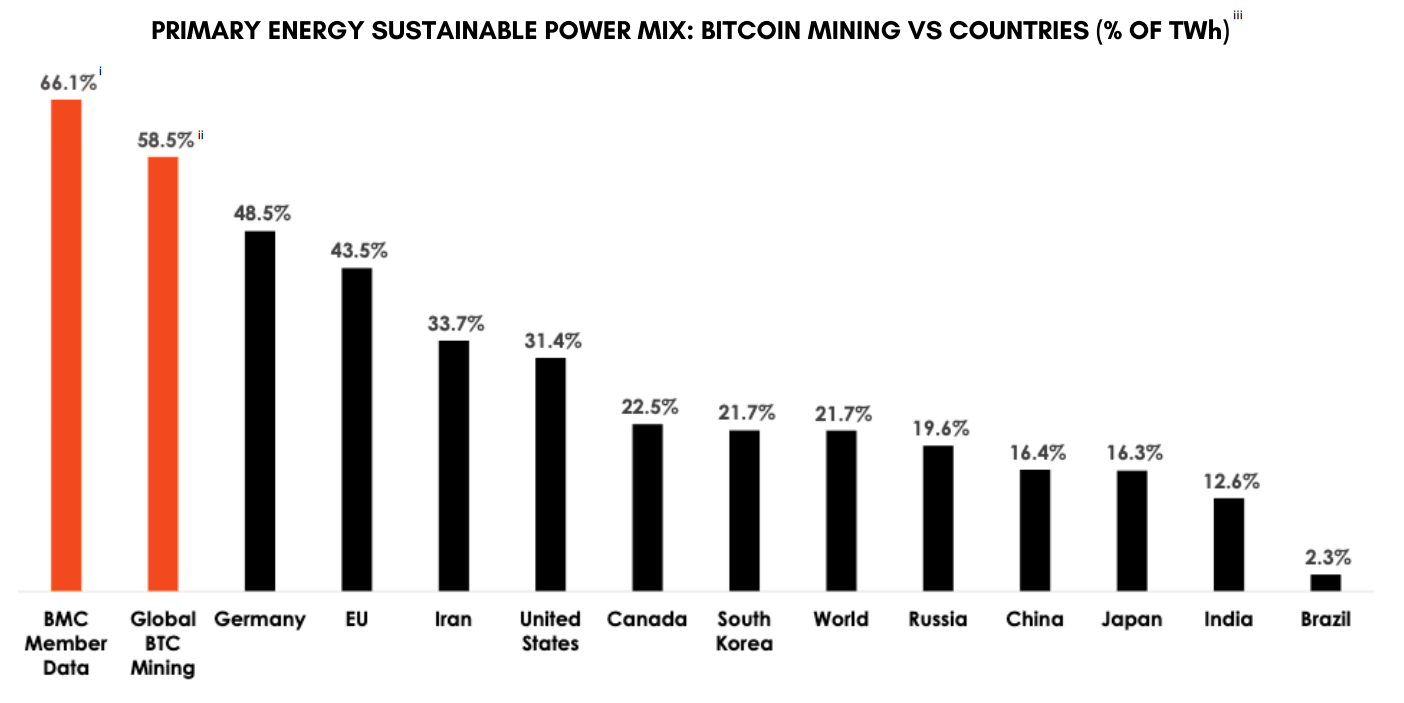 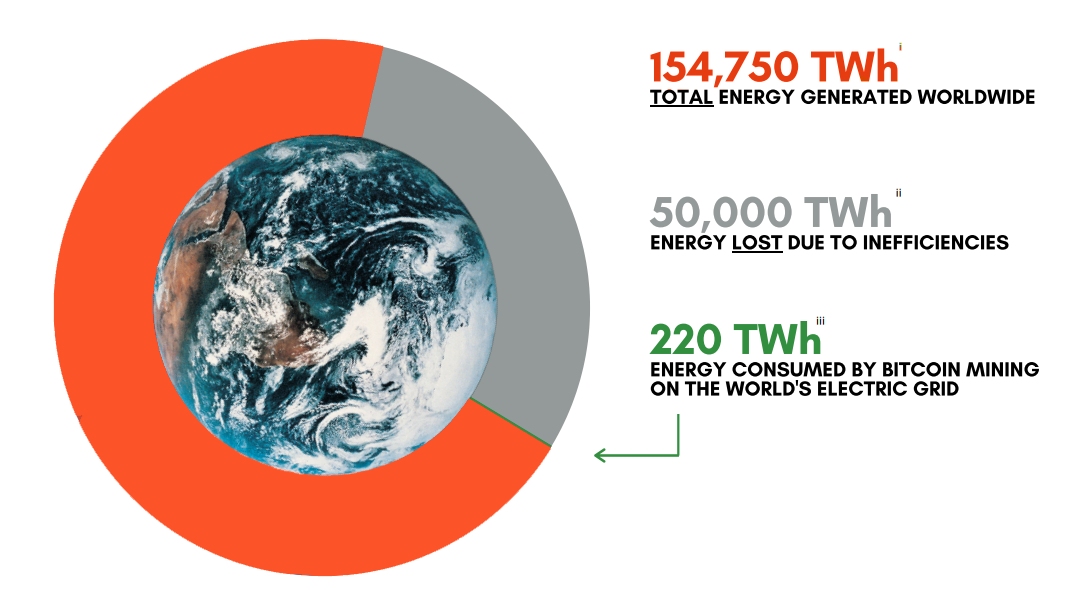 Bitcoin’s Proof of Work is preventing emissions and using energy that would’ve otherwise been wasted.

Bitcoin mining actually helps oil & gas companies reduce their emissions by approximately 63%, eliminating their use of flaring. The total worldwide figure for flaring is 150 billion cubic meters of methane, which results in 1536 TWh wasted. This is enough energy to power bitcoin about 7x over what it’s currently using.

The logical path forward is for bitcoin to continue using increasing amounts of energy, and that’s a positive factor, not a negative one. Bitcoin will continue to use more energy that would have otherwise been either wasted or destructive to the environment.

Change the code? Not on my node.

“The nature of bitcoin is such that once version 0.1 was released, the core design was set in stone for the rest of its lifetime.” - Satoshi Nakamoto

Bitcoin's users (node operators) - not the founders, miners or developers - are ultimately in control of the protocol. Proof of Work won't be removed because it's what guarantees that no one can tamper with bitcoin. No one can create new tokens without putting in the required work (energy), and that's in the interest of the users.

In proposed alternatives like Proof of Stake - which Ethereum is implementing - large token holders have more power than average users. The founders of Ethereum own the most amount of tokens, since they created 70% of them out of thin air (sound familiar?) when the project was launched in a so called "premine". Their huge stake gives them control over the protocol. You need to trust them not to vote in upgrades that hurt your interests as a participant in that ecosystem.

We know the problem. Central and commercial banks constantly create fiat currency out of thin air to enrich themselves and the Wall Street elites around them at the expense of everyday people who buy less and less with each paycheck.

We know that fiat currency stakeholders are incentivized not to change. Bitcoin’s success means that it will render fiat currency worthless - and that means central banks, governments, and a lot of powerful corporations can no longer benefit from unlimited money creation. As a result, they have an incentive to spread disengenuous information about bitcoin and the vital role of its energy use.

We know the bitcoin community is overwhelmingly motivated by a sense of progress, fairness, and good intentions. Many advocates are vocal about addressing false narratives about bitcoin’s energy use. The dream of so many Bitcoiners is within reach - but only if the industry gets serious about spreading factual information and helping people understand why bitcoin is the only thing that can fix the money and break fiat currency's dominance.

We know sound money requires energy to work. Fiat currencies are extremely easy to produce. It only requires adding digits in a central database. Gold functioned as sound money for thousands of years because its production required energy and therefore couldn’t be inflated. Similarly, the requirement to use energy to mine bitcoin guarantees its scarcity.

We know the bitcoin protocol can only be changed by its users. Unlike central banks or Ethereum, bitcoin isn’t controlled by a small group of people - it’s controlled by all of its users. They are distributed all around the world - with estimates ranging anywhere from 16,000 to 100,000 nodes. Developers improve the software, however, they can't force any changes the users don't to want to adopt, since users choose what version of the software they run. Unlike Ethereum, backwards compatibility is a core premise of bitcoin development. It guarantees each user's freedom to reject an upgrade and protects the protocol's consensus mechanism.

We know that bitcoins’ energy use is not a “waste”. Bitcoin doesn't just waste energy. Proof of Work creates an unchangeable transaction history. The nodes of the network by default only trust the version of that history that has the most work (computation) behind it. This removes the requirement to trust an external source of truth. Because Proof of Work requires energy, it's rooted in pure physics and no one can falsify or cheat it. Bitcoin’s unique properties help refugees keep their hard-earned money when fleeing to safer countries, it helps families send money overseas without paying exorbitant remittance fees, and it helps everyday people protect their savings against inflation and confiscation. Just like the energy use of computers, refrigerators, and air conditioners isn’t a waste, neither is bitcoin's.

We call on leaders in tech and finance to check their financial privilege and stop misrepresenting bitcoin and the crucial role of its energy use.

Together, we can end the FUD.
Use your voice to spread bitcoin facts. 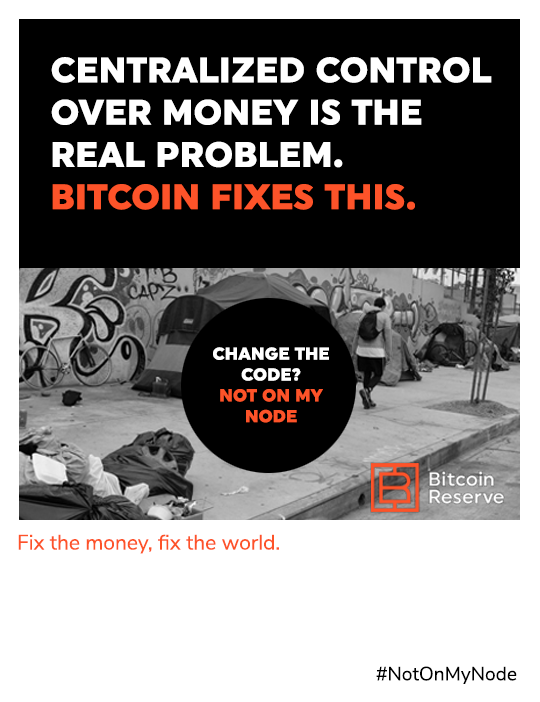 Our mission is to stop the bitcoin energy FUD.

Do you really want to know what bitcoin is all about? 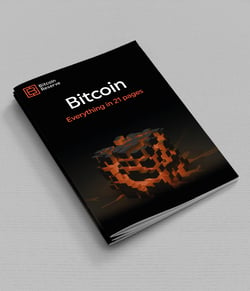